Samsung Galaxy S4 is officially announced in New York and has everything you could wish for. Galaxy S4 comes with 5.0″ Super AMOLED screen, 13.0 megapixel camera, super-thin design and has many new features. 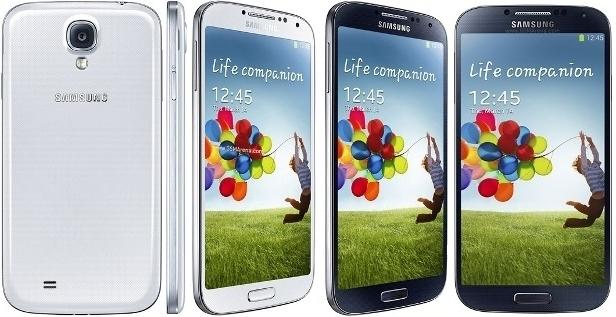 The greatest asset of the Galaxy S4 is without doubt the 4.99-inch HD Super AMOLED screen with a pixel density of 441 PPI. The result is a fine screen that, with the exception of the HTC One, has no equal.

Despite the large screen size, the S4 is barely bigger than its predecessor. It also weighs slightly less: 130 grams to 132 grams, and it is a bit thinner – only 7.9mm. Samsung remains clearly a fan of plastic. The black colour has a carbon-like look, while white is rather plain.

Another unique selling point is the Exynos 5 octa processor consisting of no less than eight cores. Four powerful ARM Cortex-A15 cores are accompanied by four energy-efficient Cortex-A7 cores that step in when there is little to do.

Then there is the 13 megapixel camera with useful features, like Dual Camera – you can simultaneously take pictures using the 2 megapixel front camera. TouchWiz has also been upgraded and has new features like Smart Scroll (sensors in the phone follow the eyes of the user, so it is also possible to use your eyes for scrolling) and Smart Pause (a video is automatically paused if the smartphone recognizes that the user no longer looking at the screen).