The HTC One (M8) Goes Official

After months of rumours, leaked information and photos, the HTC One M8 was finally released today at an event in London.

The One (M8)’s unibody is made of 90% metal (opposed to its predecessor’s 70%) and the brushed aluminium design gives it an even sleeker look. The soft curves give your a more premium feel when you hold the phone and the brushed texture results in a look “more akin to jewellery” (according to Jonah Becker, AVP of design). The HTC One (M8) comes with a hairline finish and the phone is available in three colours: Gunmetal Grey, Glacial Silver and Amber Gold. 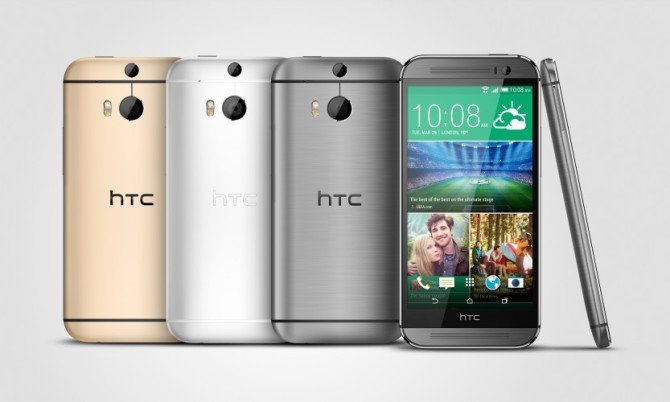 HTC One (M8) is available in three shiny colours.

The new HTC smartphone has a 5in Full HD display with a resolution of 1920 x 1080 pixels and a pixel density of 440ppi. Hardware keys have been replaced by on-screen ones, so there’s no major difference in size when compared to the original HTC One. On the inside is a 2.3GHz Snapdragon 801 processor, backed by 2GB of RAM and you can purchase the phone with either 16GB or 32GB of internal storage, expandable via a microSD slot (up to 128GB). The HTC One (M8) runs on Android 4.4 KitKat and the Sense 6 (the “6th Sense”, as referred to by Becker). The Sense has been redesigned from top to bottom and it’s more intuitive and bold. It’s a lot easier to read and has hints of warm colours that mark different activities – you can see easily where you are in the UI.

The front-facing BoomSound stereo speakers have redesigned speaker chambers and provide a clear, 25% louder sound than that found in the HTC One.

One of the most interesting new features is the Motion Launch (updated), that lets you open your camera or unlock the phone while the screen is turned off. If your M8 is in landscape mode and you press the volume button down, you will launch the camera. Double tap or slide up from the bottom to wake the phone. Another great upgraded feature is the BlinkFeed – it’s even easier to navigate through it and find the content that you want. You can also create custom feeds on any topic and instantly get articles and feeds about what interest you. 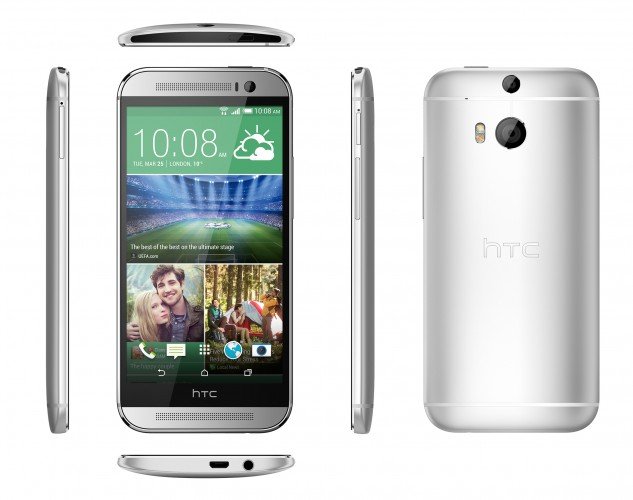 The One (M8) comes with a bunch of new features.

The HTC One (M8) has a 2,600mAh battery and a new, extreme Power Saving Mode. It promises 30 hours of use on only 10% of One (M8)’s battery. This mode will shut everything down, except for texts, calls and emails. Becker claims that the battery will last two weeks in standby time in this mode. Zoe has been updated, as well, and can now take 20 full-res stills and video in just three seconds.

The phone has UltraPixel 4-megapixel dual-cameras on its back, which HTC calls Duo Camera and promises better quality photos. The second camera is used to capture detailed depth information, which Becker said opens a bunch of creative options – your phone will know exactly which objects are closer and which farther away etc. The One (M8) also has a 5-megapixel wide-angle front-facing camera. The camera includes a lot of new modes, one of them being Selfies, and you can shoot slow motion videos and choose which part you want to slow down (“for a sense of drama”). The gallery has been redesigned, too, and you can now search for photos by day, month or year. You can also use Image Match – take a photo of your friend and you’ll be able to find all photos of him/her in your gallery. The OIS from the original HTC One is gone and the flash has been improved. As for focus, HTC claims that the One (M8) can focus in just 0.3 seconds.

The company also introduced new accessories for the HTC One (M8), the most interesting one being the Dot View Case – you’ll be able to see who’s calling you, alarms, events, weather info, etc. without opening the case. 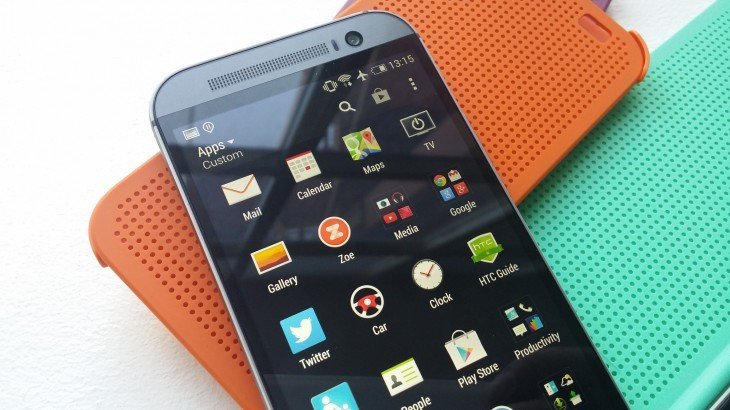 Double tap the phone with the case on and get info in a cool, bright looking interface.

230 carriers in over 100 countries will be selling the HTC One (M8) and the smartphone should hit the US and Canada stores within the first few weeks of April (some as soon as April 10th). If you can’t wait that long, you can order your One (M8) online today on a couple of websites. The One (M8) will cost £530 in the UK (SIM-free).