The New iPad Has Finally Arrived

Yesterday in San Francisco Tim Cook, Apple’s new CEO, presented the new generation of the popular digital tablet or just “The New iPad”. However, this lack of a name left most of the Apple iPad followers puzzled.

The official launch is scheduled for March 16 in the U.S. and eight more countries, including UK. The price should be around 499$ for 16 GB version, and according to Tim Cook this new tablet “redefines the category with tremendous improvements.” 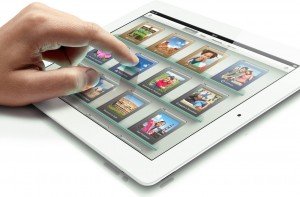 The Display of Incredible New iPad

Say hello to the new retina display. This is the ultimate characteristic of the new iPad, long awaited by fans of Apple iPad. The New iPad has the Retina display with a resolution of 2048 × 1536 pixels, making it four times more pixels than the previous version, the iPad 2. We all know how great was iPad 2 display. But now you will see the difference – the sharpness of the text is staggering and vibrant colors are simply amazing. To make a screen so powerful, Apple had to rethink its integral design. Thus, they managed to separate the pixels and the signals (which indicate light) during their crossing to avoid degrading the image quality. This is the perfect example of a cutting-edge technology.

iSight 5MP – the camera of this new iPad is also as amazing as its screen. It allows you to take photos and videos in 1080p high definition. To operate all this high-quality imaging, a powerful chip is needed. That is why the New iPad features the A5X. This chip treats all aspects graphs with even greater speed and efficiency. Its low power quad-core processor (SoC) is concerned about what you can do those tasks – simple or more complex with equal speed and an endurance of 10 hours.

Here is what we know about The  New iPad:

Now all we can do is wait for the new iPad to become available worldwide, and of course we are all looking forward to see many of the iPad accessories for the new model, that are doubtlessly soon to come!