Qualcomm unveiled its latest chipsets that will power the majority of next year’s smartphones. Both Snapdragon 808 and 810 are 64-bit processors and, according to the company, its highest performing chipsets to this date. Both come with ARM Cortex A5x CPU cores instead of Kraits and should bring improvement in terms of performance, LTE and 3D rendering.

Snapdragon 808 has an Adreno 418 GPU and is designed to support displays up to a resolution of 2560 x 1600 pixels (a WQXGA resolution). It features two Cortex A57 cores and four Cortex A53 cores, as well as 12-bit dual Image Signal Processors, support for LPDDR3 and 4K external video HDMI1.4. 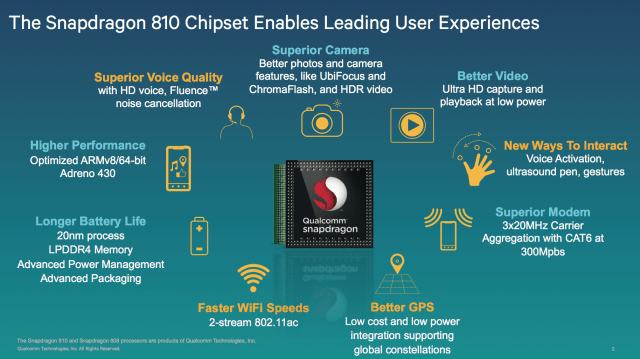 The 810 should offer 25-55% increase in performance at the cost of just 20% in power consumption.

Both chipsets should become available in the first half of 2015.